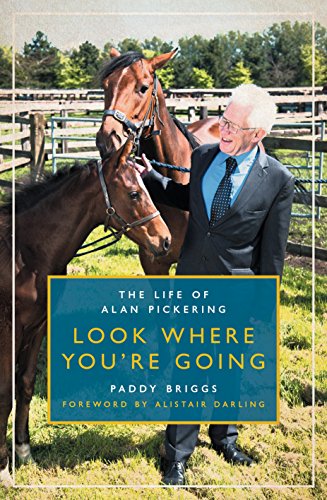 Alan Pickering’s tale is not just the story of the local boy who came good. It’s the story of a boy who did very well indeed. Born with a degenerative eye disease that left him blind by the age of thirty, Alan Pickering was not going to let this stop him becoming a leader in the world of pensions, winning Greatest Single Contribution to Occupational Pensions (19982017)’ at the Professional Pensions UK Pension Awards.

His achievements, however, were not solely limited to the highly technical world of pensions. A lifelong fan of horse racing, Pickering has become a keen racehorse owner himself, and was honoured to be elected a vice-president of the Racehorse Owners Association. Throughout his life he has never let his lack of sight hold him back, and he maintained a strong passion for athletics participating in competitive race walking and running numerous marathons over the years.

In Look Where You’re Going Paddy Briggs uncovers the very human story behind a man best known for the Pickering Report, commissioned by the Blair government. From interviews with friends and family as well as conversations with Alan himself, he reveals a man whose intellect and amiable nature allowed him to push his disability to one side to succeed on his own terms.